By Brett Tomlinson   Published in the February 8, 2017 Issue 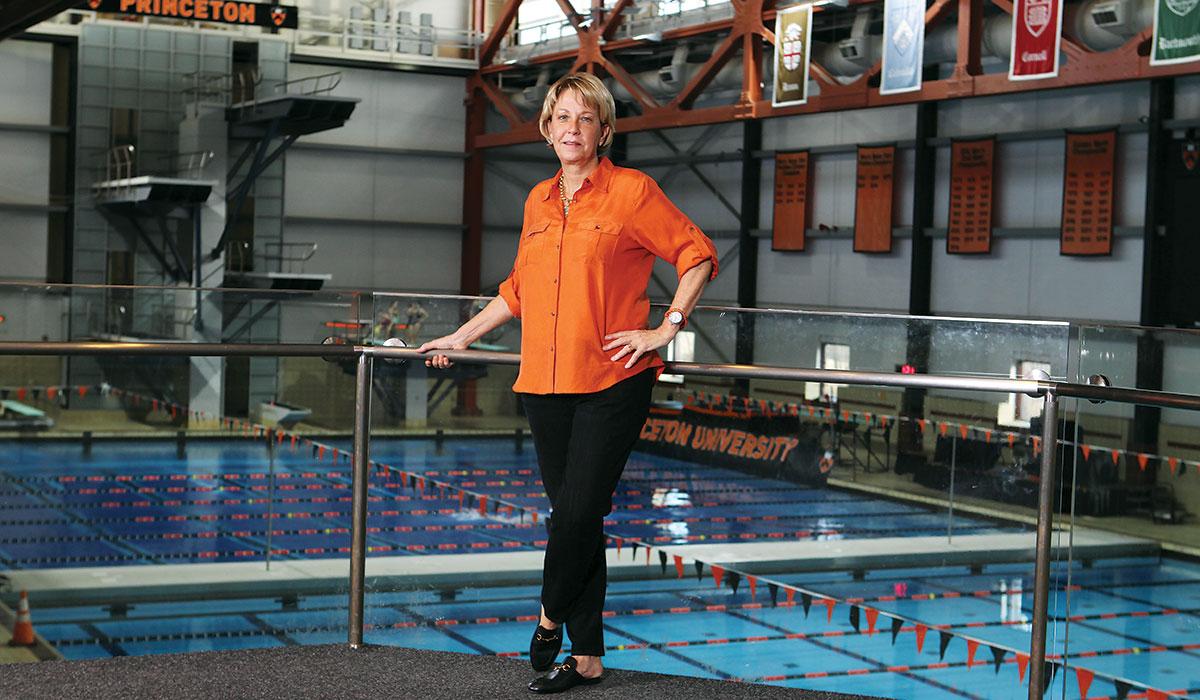 Photo by Beverly Schaefer
In 33 seasons, Susan Teeter’s teams have won 17 Ivy titles.
Teeter to step away after building a tradition of successful swimmers
Women’s swimming and diving coach Susan Teeter keeps a handful of magic tricks in her office on the deck of DeNunzio Pool. One of her favorites is a “magic vase” that she has used to motivate her team at big meets.

“No matter how much you drain it, when you set it down, magically, water appears again,” she says with a half-smile. The message: When you think you’re empty, you’ve got to make that water appear, somehow, some way.

For 33 seasons, Teeter has been replenishing the reservoir of Princeton swimming with remarkable success, leading the Tigers to 17 Ivy League championships and more than two dozen All-America certificates. Later this month, her team will try to bring the coach one more title.

Teeter announced her upcoming retirement in early December, and appreciative messages from alumni and others in the swimming community quickly followed. “It’s been humbling,” she says. “Some of the emails and some of the cards I have to stop reading because I can’t see through my tears.”

When alumni talk about Teeter — invariably “Teeter,” never “Susan” or “Coach” — they highlight the same characteristics: her grace and class; her insightfulness and dedication; her emotional IQ; and the leaping, cheering enthusiasm that momentarily overrides her best efforts to stay calm and composed during meets.

Grace Cornelius Limaye ’95 recalls the first time she met Teeter, at a national meet in 1989. In the warmup pool, another swimmer accidentally jumped in on top of Limaye, and the edge of Limaye’s goggles opened a gash under her eye. Teeter “basically just dropped everything and helped me,” says Limaye, who went on to be an All-American and captain at Princeton. “That’s what she does, and that’s why she has such a devoted following.”

“Anyone can write a practice or take a split,” says Nikki Larson ’16, one of last year’s captains, “but not all coaches can figure out what makes people tick. … [We knew] she would be there, even if it wasn’t swimming-related.”

For Lisa Boyce ’14, another team captain and All-American, Teeter’s influence was apparent when she first met the upperclass swimmers during a recruiting trip. “They seemed poised, they seemed put-together,” she says. “They were the people I wanted to grow up to be like.”

Alyson Goodner ’00 adds that with a roster of more than 40 athletes, Teeter works to make sure “everyone feels appreciated and respected.” Goodner has had a particularly close relationship with the coach, who officiated at her wedding in 2012 and now is the godmother to her son. Even long after graduation, Goodner says, “she’s someone we constantly strive to make proud of us.”

As a competitive swimmer, Teeter’s career did not have a smooth start. She entered high school a few years after Title IX passed, opening the modern era of women’s athletics. But the schools in her native Memphis were slow to welcome girls’ teams. Teeter petitioned the board of education to swim in the boys’ meets, a request that the athletic director approved with a caveat: The girls would need to find their own supervisor. Teeter convinced the football coach to sign on, and into the water she went.

Soon after, while working as a lifeguard at a local country club, Teeter took her first coaching job. “I just got hooked on motivating young people and seeing the reaction when they could achieve something that they didn’t think they could achieve,” she says.

At the University of Tennessee, Teeter started as a team manager and was promoted to assistant coach while still an undergrad. By the time she became Princeton’s head coach in 1984, she was a veteran of sorts, though still only a few years older than her swimmers.

Teeter won her first Ivy title in 1990 when the Tigers swam to a 7-0 dual-meet record. In the next decade, her teams won the league four more times, and the coach served on the staffs of two U.S. Olympic teams. From 1998 to 2004, women’s swimming and diving won 47 straight dual meets, a Princeton record for any sport. The Tigers remain a perennial favorite at the Ivy meet, winning four of the last seven titles.

Teeter says she has always wanted “to be somebody who walks off the deck when I still love the sport and still love coaching.” The downside, she concedes, is that she’ll miss the job. But she hopes to stay connected to her sport. She is president of the College Swimming Coaches Association of America, with a full year left on her term. She also runs team-building workshops part time and hopes that work will continue to provide an “inspirational fix.”

“I’m never going to stop coaching,” she says. “Coaching’s ingrained in me.”